The Kooples Storm the Tents

The Kooples made their Project Show debut this year. This...

The Kooples made their Project Show debut this year.

This French based, British punk inspired fashion company is all about 'the couples.' 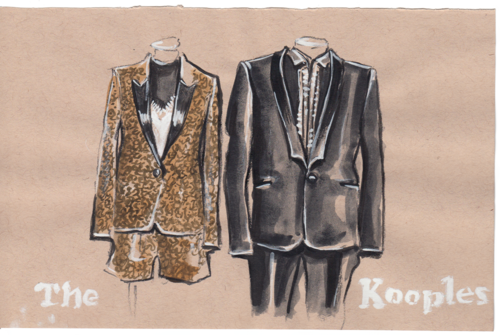 A play on the French pronunciation of 'couples,' The Kooples follows up it's name with a fun play on French chic.

Brothers Alexandre, Laurent and Raphaël brought their young fashion company to the UK in 2010, sweeping the streets of London and the like with their couple-centric branding and heavy wave of marketing, alongside neighboring French brands Maje and Sandro.

This year, their inaugural year, The Kooples were featured in The Tents in Vegas. The Tents at Project Show are a special showcase of unique brands and exciting companies.

As a part of the Blogger Project I had the honor of sharing the 'Best of the Tents' award with the Kooples team. Only one person was able to present the award and a fight broke out.

I threw an elbow with an exclamation, 'This award is mine!'
A fist met my face, 'Not today,' they yelled.

And alas I did not win out.

The Vegas, 2014 'Best of the Tents' award was presented framed along with an engraved bottle of champagne. Congratulations on work well done The Kooples.