Ah the city, the city that never sleeps. New York...

I was there and now I am gone.

New York is the city for Menswear. Here, you don't just enjoy Menswear, you make it, you influence it, you are moved by it. In new York Menswear is a living entity.

This is why I had to go. Convenience has it that the wife and I are currently in Delaware (oh the great Nomadic life) which is in great proximity to the city of lights.

Scroll through the photos as I take you on the Sunflowerman Journey through New York City. 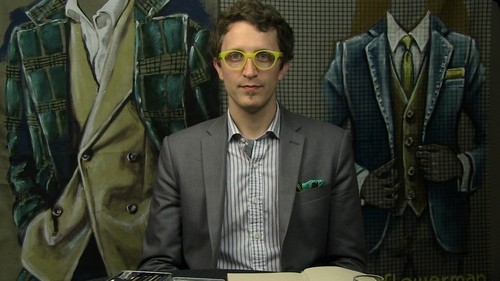 My poker face during an interview with Amon Focus. It was an impromptu studio visit and Miss T cooked an amazing dinner. I arrived around 10 and we didn't start shooting until midnight.

I am extremely disappointed in not having a nice camera. My iPhone 4s is great but it only does so much. One day I will be able to afford the luxury of high quality photography.

My first visit was with Clay Chambers, one of the 4 brothers of Brothers and Craft. Now I have talked with half of the BaC crew and only a small percentage of the Chambers siblings. Hopefully I can meet them all one day.

I had the amazing honor of visiting the Tumblr headquarters and getting to know Valentine (Menswear Evangelist). He was an amazing person to talk with. His quiet demeanor and thoughtful words were a great way to start my week in New York. The end of the first day of meetings was spent with Mack Weldon. Great group of gentlemen. They are heavily focused on contemporary style. I walked away with these perfect yellow socks to round out the Sunflowerman accents. Amon set up the studio for shooting and tried to escape my camera. He came back with his jacket. A much more dapper look for this man of Digital Media. On the morning of my first full day in New York during this trip I visited the Tumi showroom. I brought along this illustration I did of the Tumi Bashford Duffel. I tried on a bag or two. This one has straps for traveling that can be zipped into a side pocket. The color is amazing and the design is fantastic. I tried to walk out with this bag. They noticed before I got to the elevator. Tumi is coming out with a new leather collection. This 1975 collection is an homage to 40 years of Tumi travel bags and bare the original Tumi logo. I already have a Tumi bag of my own that I have been breaking in. I carried it all around New York as a mobile showroom of my own. It carried my sketchbook, book page paintings, giveaways and fabric paintings. Occasionally it had cookies, cigars and whiskey. I was thrilled to meet Hallie Heald who had painted me a while back. She snapped a pick of me holding the painting. Such an honor, thank you Hallie. Wednesday evening I was the host of the aptly named Whiskey Wednesday at the Alexander Nash NYC studio. It was a great opportunity to meet new people and to soak in the glory that is the Alexander Nash boutique. Fashitect (Toni Tran) was able to join us and snapped this shot as a test for his own photographs. Fashitect also snapped a great pic of me doing a live drawing of Naj Wareham during Whiskey Wednesday. Sebastian was capturing a time lapse video over my left shoulder and as an artist I balanced my tools with my teeth. This time captured by Amon Focus from another angle of the Naj Wareham live drawing. I don't usually have an entourage of people around me so this was quite the treat. The man, Naj Wareham with his Picasso in hand. I also had the great opportunity to draw Sebastian and Alex. Held in great style by Sebastian. Before the Whiskey Wednesday event began I captured a quick sketch of Fashitect. He sits in real life as well as he does in photographs. I met Tom Vega who I had previously featured in the Daily Fashion Project. It was great to see one of my illustrations in real life. Read his story and see his illustration here on the DFP. After the Whiskey Wednesday event I went to a party for Haspels 105 year anniversary then met up with some good friends who I knew from Atlanta. There's me, Bryan, Dustin and a new friend David Byrd. On Thursday I had the insane pleasure of meeting Alexandre from The Promotion Factory.  I shared my story and my work and sneaked a few wrist shots.

This is a brand that was new to me. CT Scuderia, an Italian brand with Cafe Racers on the mind. My mind was blown with the collection of Girard Perregaux watches that they had on hand. This 1966 watch is exactly what I have in mind when I think of the perfect Sunflowerman time-piece. Maybe more so if it had a small accent of Sunflowerman Yellow. By the end of my time in New York my poker face had broken and I was simply in love with the city again.

The Tumi Global Citizen The Bashford Leather Duffel- featured in the illustration above- is great for carrying on to a...