Harris Levinson and Ryan Hahn were wed in made-to-measure Thom Browne, from head to toe.

Meet Harris Levinson and Ryan Hahn: a couple my admiration for only grows with each day. Harris is from Long Island and owns Emoticon Productions, producing a significant portion of Condé Nast's digital content. Ryan, from Iowa, is an Associate Marketing Manager at HBO. Funny enough (and they’ll admit this themselves), they couldn’t be anymore opposite of each other. But it’s just that, the principle of yin and yang that serves as grounds for their relationship -- and ultimately the premise for their wedding in beautiful Saint Barthelemy. A New York City wedding was nixed. Sure it made sense: they could have invited more people, the lack of traveling arrangements and accommodations could have spared the headache(s), and the wealth (literally and figuratively) of beautiful venues to choose from was aplenty. But they wanted it to be unique, rather than an evening guests would quickly block off ahead of time in their iPhone calendar and take the NQR or an Uber to 15 minutes before the ceremony began. With a unique experience as a tropical destination wedding -- made even more appreciative after the bitter NYC winter we’ve had -- you have more time to appreciate the intricate details they’ve so thoughtfully planned for a year and a half, not the least of which entail made-to-measure Thom Browne suits for each groom, which were intentionally and cleverly constructed with yin and yang in mind. 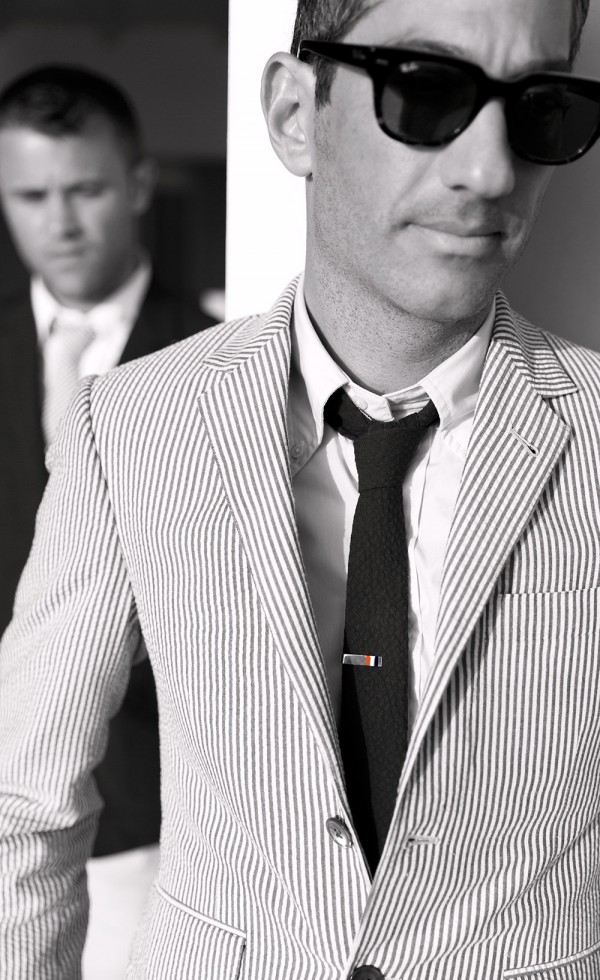 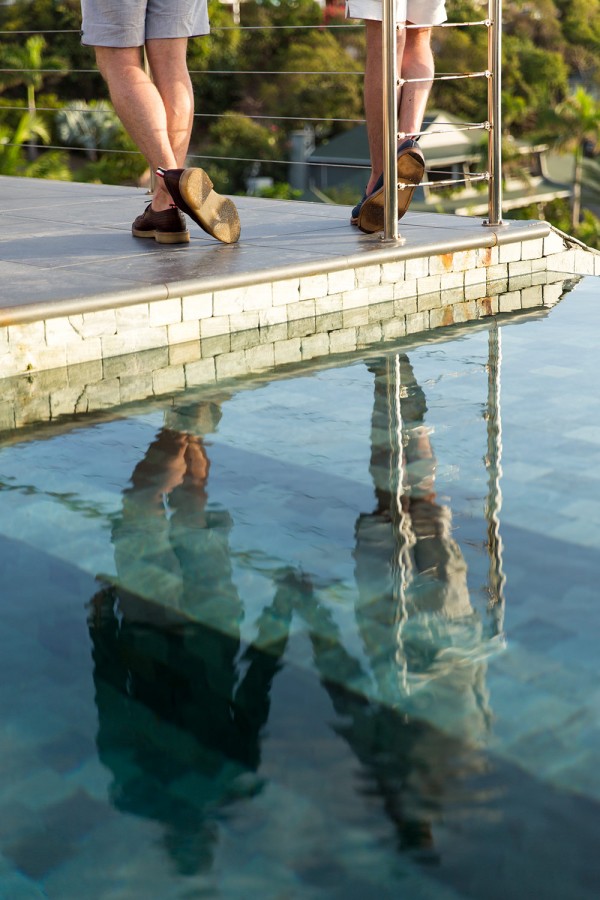 The Thom Browne team ran with the project. They knew two things: (1) two grooms and (2) a tropical wedding in St. Barths. The result: a thoughtful suiting duo that couldn’t be any better suited for these newlyweds. Just like yin and yang, their outfits complimented each other. The first proposal? Short suits -- very Thom Browne (and quite befitting for 91 degree weather). The next proposal? Seersucker. Harris’s jacket is a gray and blue striped seersucker; Ryan’s is of the same fabric, but dyed navy. To tie (pun obviously intended) their outfits together, Harris’s tie is made of the exact same jacket fabric as Ryan’s, whilst Ryan’s tie of Harris’s. The fourth proposition: loose fitting ties (the eyelet collar buttons of each of their shirts were actually moved and resewn specifically for this purpose) with tie bars snapped between the 3rd and 4th shirt button -- tie tucked in, of course. Next, no belt -- that would break up the look -- so tailored shorts and side tabs were the remedy. 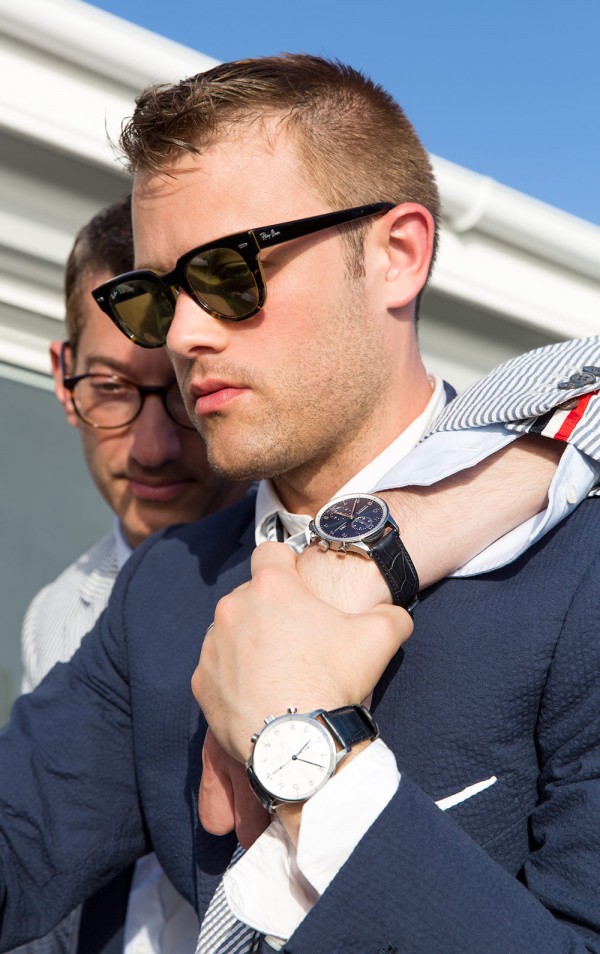 Instead of wedding rings (though there were Cartier engagement rings, complete with a surprise Parisian proposal by Ryan at l’Avenue -- more on that after a few scrolls), the grooms exchanged IWC watches of complementary designs. To accommodate, Ryan’s one jacket sleeve was shortened by a ½ inch to showcase his watch at his lowest arm level. 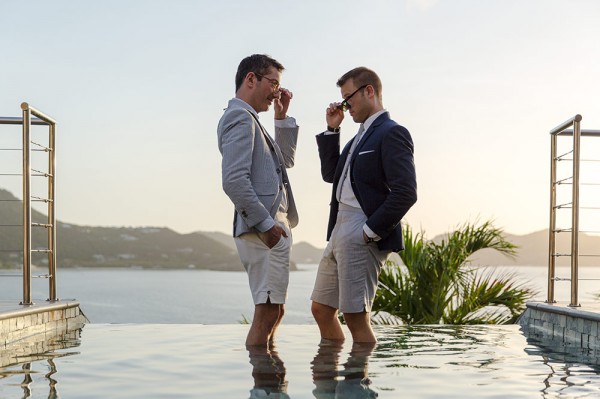 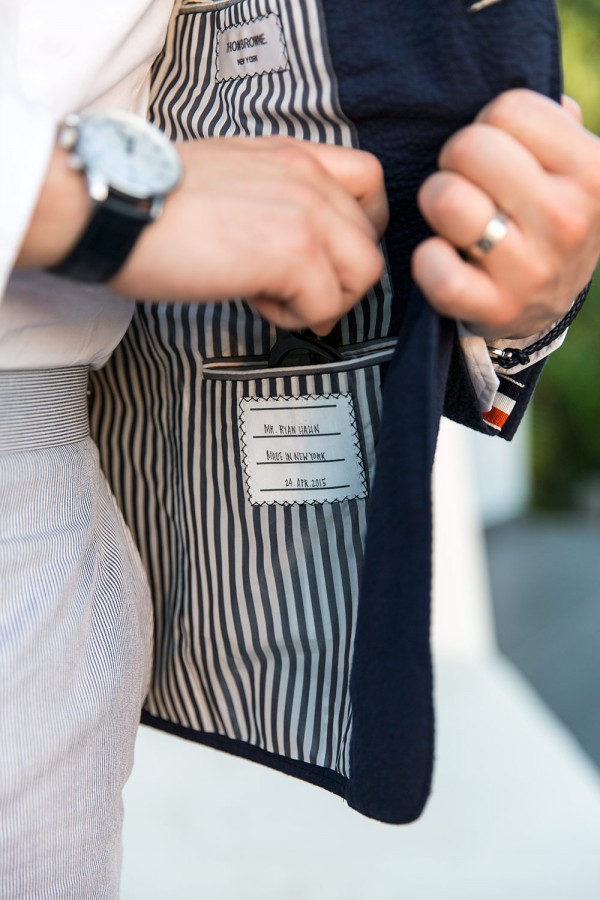 Last, but not least, the signed seal of approval -- or it’s not custom Thom Browne. Harris and Ryan’s jackets, shirts, and ties were handwritten with each of their names, the date of their wedding, and where the garments were made. Side note: all Thom Browne employees are required to study Thom Browne's own handwriting ardently, which takes about an hour or two, before being able to sign any garment of his that's made to measure.

French-inspired touches adorned the late April tropical wedding, all inspired by Ryan's surprise engagement in early October of 2013. At the time, Harris had just completed producing the Paris shows (Louis Vuitton and Hermès Spring/Summer 2014 were on the day's agenda) and had been strategically set up that night to dine at his favorite restaurant, l'Avenue, where he could celebrate with shrimp risotto (his favorite dish on Earth) and Sancerre (the only wine he drinks -- and the only wine available at the wedding). Needless to say, Harris was about to call the restaurant quits for a quick sushi bite around the corner as a result of the day's exhaustion. Alexander McQueen video edits were to be made that night. 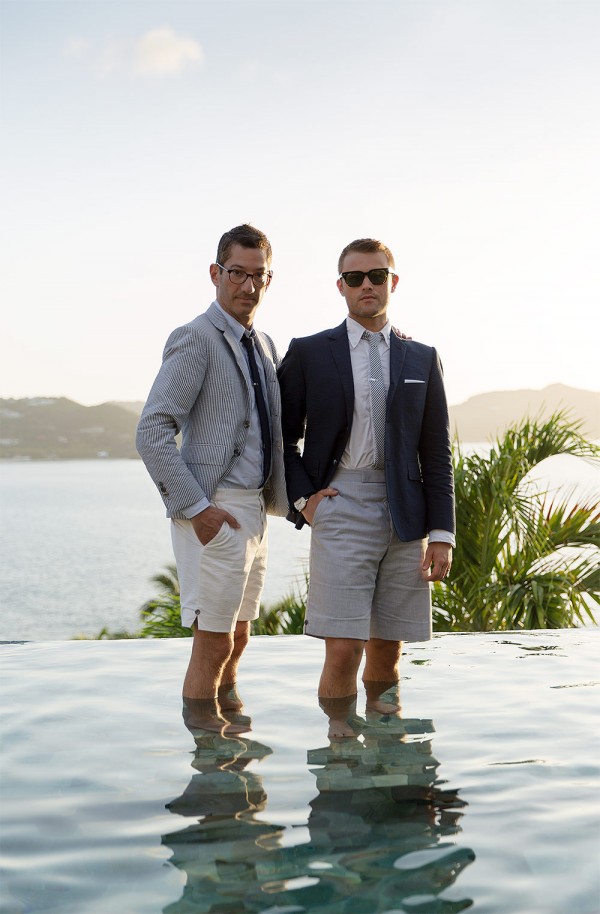 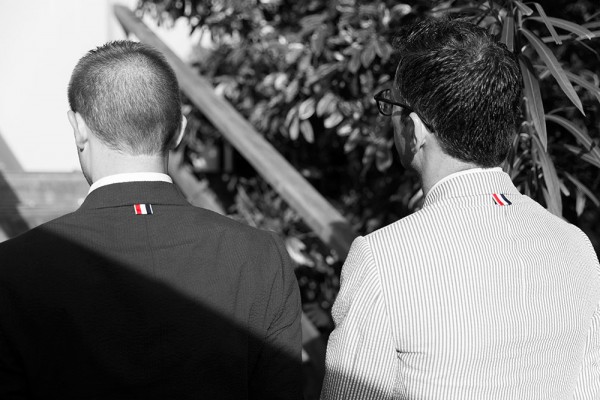 Ryan made it to Paris early that day, roaming about the city waiting for his big moment to propose until dinnertime at l'Avenue where he hid behind a curtain. Instead of Harris receiving a dessert menu, the waitress had given him a box of fresh Ladurée macaroons tied with a bow (the wedding invitations were a small box of such macaroons). Behind his shoulder was the surprise tap from his future beau, Ryan. Am I getting Punk'd? Harris had no idea. But an endearing "Yes!" and a restaurant filled with tears-of-joy later led to husband and husband, officiated in francophone St. Barths wearing neck-to-toe, made-to-measure Thom Browne.

By Calvin A. Walker

It can be said that Thom Browne marches to the sound of his own drum. For his Spring/Summer 2013 offering,...