Agnelli-Esque. Receiving an email from Gianni Agnelli is a breathtaking... 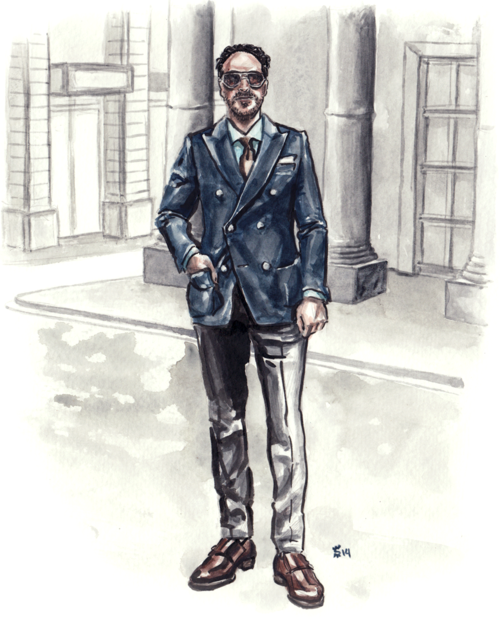 Receiving an email from Gianni Agnelli is a breathtaking experience.

Then you realize that he has been dead for a decade which starts the wheels of imagination turning. Perhaps this gentleman had several million dollars' inheritance and only needed my bank account information to transfer the money to his own account.

A painting from me, of all people. But of course, as a fashion illustrator I do draw the sorts of people who have an affinity for fashion. 'Gianni' runs a fashion blog called Agnelli-esque on tumblr. It focuses on men's fashion and lifestyle. Also find him on instagram @agnelliesque.

It turns out that he is a big fan of the late, great Gianni Agnelli.

The challenge with this illustration was to create a new look based on a few portrait photos for reference. He likes a simple yet classy aesthetic. A double breasted suit with dark pants and monk straps do him just fine. Not all of the sketches are shown here. We scratched through sketch after sketch attempting to capture the right body posture, shape, proportion and position.

In the middle of the project I traveled up the East Coast with my wife, Ruth for a week and had to let the sketches rest for a bit.

Eventually I muscled through the pre-work and got down to the creation.

What emerged is a classy men's ensemble in a truly Angel Bespok-ian sort of posture with the hand in the pocket and the offset legs. A touch of contrapposto is belied by the rigidity in the shoulders. Shades give just enough of a flair for the fantastic to stand out as a 21st century clothing compilation.

Thank you for reading,
Matthew Miller.

Why Fashion is Important

“Fashion is about dreaming and making other people dream.” This is how Donatella Versace perceives fashion and we could go...